My research focusses on the co-evolution of galaxies and their supermassive black holes, in particular the process of quenching whereby galaxies stop forming stars. I wrote a review of the topic in the introduction of Smethurst et al. (2017) which looked at the environmental dependence of quenching. During my current position as research fellow I am focussing on determining whether active galactic nuclei (AGN) cause quenching of star formation in a galaxy due to negative AGN feedback.

I am using the SDSS-IV MaNGA survey data to infer the quenching histories of galaxies hosting AGN (selected using multi-wavelength techniques). The MaNGA survey is an IFU survey which provides spectra in up to 127 mosaic 'spaxels' for each galaxy it targets. Using this spectral data along with my star formation history inference code, SNITCH, will allow me to determine if AGN are the true cause of quenching in galaxies or if their activity is a consequence of another quenching mechanism.

Figure 1: Image of an example target galaxy from SDSS (left) showing the hexagonal fibre bundle coverage (magenta) with corresponding data from the MaNGA survey showing the spectral index D4000 (middle, a tracer of stellar age) and equivalent width of the Hα emission line (right, a tracer of star formation) resolved across the galaxy in each of the spaxels.

This work was inspired by a study I completed in my thesis and now published in Smethurst et al. (2016). Using a star formation history code I developed, STARPY I inferred the global quenching histories of over 1000 AGN host galaxies in the SDSS using their optical and NUV photometry. This work showed that across the AGN host galaxy population, there is a higher likelihood for rapid, recent quenching to have occurred than in a mass matched sample of currently inactive galaxies. Whilst it is tempting to claim that this quenching is caused by AGN feedback, we need the follow-up work with the MaNGA survey data in order to confirm this.

Figure 2: The difference in the time (left) and rate (right) of quenching in nearby galaxies that host AGN (black, solid) compared to galaxies with inactive SMBHs (red, dashed). The plots are normalised so that the areas underneath the curves are equal. The peaks in the black, solid lines show that recent (∼ 12 Gyr left panel), rapid (∼ 0.1 Gyr right panel) quenching is occurring in the AGN host galaxy population, which is not seen in the inactive galaxy population (red dashed lines), suggesting this quenching may be caused by AGN feedback. Adapted from Figures 4 and 5 in Smethurst et al. (2016).

In Figure 2, you can also see that some AGN host galaxies have quenched slowly, with rates that are more consistent with secular, non-violent processes. This highlights another area of my research, highlighting the importance of non-merger processes in the contribution to black hole growth. In Simmons, Smethurst Lintott (2017) we showed that a population of bulgeless galaxies had measured supermassive black hole masses 2 orders of magnitude higher than predicted by the black hole mass - bulge mass relation. However, their black hole masses were as expected given their total stellar mass (see Figure 3). This work was followed up by Martin et al. (2018) who showed that this was also the case when tracing the black hole masses through the merger trees of the Horizon-AGN simulation. Martin et al. (2018) showed that in the Horizon-AGN simulations, 65% of the cumulative mass in SMBHs is grown through non-merger processes.

Figure 3: The SMBH mass against stellar mass of the bulge (upper limits for disk-dominated systems shown by the black arrows; left) and the total stellar mass (right). .

This raises the question of what rate gas is inflowed to the centre in systems which have merger-free histories. In Smethurst et al. (2019b) we followed up 12 of these disk-dominated AGN with over-massive SMBHs which showed blue-shifted outflows in [OIII] in their SDSS fibre spectra using the Shane-3m at the Lick Observatory. We calculated the outflow rate and the accretion rate of the black hole to determine a lower limit on the inflow rate of material to the centre of these systems which have not undergone a merger. The average inflow rate was ~ 1 solar mass per year. This work provided further evidence that secular mechanisms were sufficient to fuel SMBH growth.

Figure 3: The reduced narrowband images showing the blueshifted broadened emission in [OIII] for each galaxy. Listed is the name (top), outflow rate measured (middle) and inflow rate calculated (bottom; lower limit, from addition of the outflow rate and accretion rate of the black hole)..

Using STARPY I have also looked at the visual morphological dependence of quenching across a sample of over 126,000 galaxies from the SDSS, published in Smethurst et al. (2015). In this paper I showed that contrary to previous work the Green Valley is NOT a 'red herring'. More recently I have also looked at the kinematic morphology dependence of quenching using STARPY and have found that slow rotators are more likely to quench at a faster rate than fast rotators. This work was undertaken with the MaNGA survey data and has been published in Smethurst et al. (2018).

With my inference code I have been able to study a broad range of different possible quenching mechanisms in order to help understand the bigger picture of galaxy evolution.

Secularly powered outflows from AGN: the dominance of non-merger driven supermassive black hole growth MNRAS, 489 4016 Smethurst, R. J. et al. (2019b) The SDSS spectra of 12 disk-dominated AGN revealed outflows in [OIII]; we detected 10/12 of these in follow-up narrowband imaging using the Shane-3m at the Lick Observatory. We calculated the outflow rate and the accretion rate of the black hole to determine a lower limit on the inflow rate of material to the centre of these systems which have not undergone a merger. The average inflow rate was ~ 1 solar mass per year. This work provided further evidence that secular mechanisms were sufficient to fuel SMBH growth.

SNITCH: seeking a simple, informative star formation history inference tool MNRAS, 484, 3590 Smethurst, R. J. et al. (2019a) This paper describes SNITCH, an open source code written in Python, developed to quickly (∼ 2 minutes) infer the parameters describing an analytic SFH model from the emission and absorption features of a galaxy spectrum dominated by star formation gas ionisation. In this paper, we outline the rigorous testing applied to snitch and show that it is both accurate and precise at deriving the SFH of a galaxy spectra.

SDSS-IV MaNGA: The Different Quenching Histories of Fast and Slow Rotators MNRAS, 473, 2679 Smethurst, R. J. et al. (2018) In this paper we inferred the quenching histories of regular (fast) and non-regular (slow) rotators in the MaNGA sample using STARPY, an open source Python star formation history inference code. The two galaxy populations are found to have statistically distinguishable (3.2𝞂) distributions of inferred quenching rates. We find that fast rotators quench at a much wider range of rates than slow rotators, consistent with a wide variety of physical processes such as secular evolution, minor mergers, gas accretion and environmentally driven mechanisms. Quenching is more likely to occur at rapid rates (τ <∼ 1 Gyr) for slow rotators, in agreement with theories suggesting slow rotators are formed in dynamically fast processes, such as major mergers.

Supermassive Black Holes in Disk-Dominated Galaxies Outgrow their Bulges and Co-Evolve with their Host Galaxies MNRAS, 470, 1559 Simmons, B. D., Smethurst, R. J. & Lintott, C. J. (2017) In this paper we investigated how supermassive black holes grow in the absence of mergers using a sample of 101 disk-dominated galaxies. Comparing black hole masses to conservative upper limits on bulge masses, we show that the black holes in the sample are typically larger than expected if processes creating bulges are also the primary driver of black hole growth. We suggest that more fundamental processes which contribute to galaxy assembly are also responsible for black hole growth.

Galaxy Zoo: The interplay of quenching mechanisms in the group environment MNRAS, 469, 3670 Smethurst, R. J. et al.(2017) Here, we investigate the detailed morphological structures and star formation histories of a sample of SDSS group galaxies using Galaxy Zoo classifications and the inference code STARPY. Our results suggest that the environment does play a direct role in galaxy quenching through quenching mechanisms which are correlated with the group potential, such as harassment, inter- actions or starvation. Environmental quenching mechanisms which are correlated with satellite velocity, such as ram pressure stripping, are not the main cause of quenching in the group environment. We find that no single mechanism dominates over another, except in the most extreme environments or masses.

Galaxy Zoo: evidence for rapid, recent quenching within a population of AGN host galaxies MNRAS, 463, 2986 Smethurst, R. J. et al. (2016) We inferred the star formation histories of a sample of 1244 Type 2 AGN from SDSS using STARPY, and compared them to a control sample of inactive galaxies. We found evidence for recent, rapid quenching occurring in the sample of AGN, which is not the dominant quenching route for the inactive galaxies. However, we also show that histories of rapid quenching cannot account fully for the quenching of all the star formation in a galaxy’s lifetime across the population of quenched AGN host galaxies, and that histories of slower quenching, attributed to secular (non-violent) evolution, are also key in their evolution. This work raised the issue of whether the AGN were the direct cause of the quenching detected, or whether the AGN are a consequence of another quenching mechanism.

Galaxy Zoo: Evidence for Diverse Star Formation Histories through the Green Valley MNRAS, 450, 435 Smethurst, R. J. et al. (2015) In this paper we introduce the star formation history inference code STARPY, which uses the NUV and optical photometry as inputs. We applied this code to a large population of galaxies across the red sequence, green valley and blue cloud. We found a clear difference between the quenching time-scales preferred by early- and late-type galaxies, with three possible routes through the green valley dominated by early- (rapid time-scales, attributed to major mergers), intermediate- (intermediate time-scales, attributed to minor mergers and galaxy interactions) and late-type (slow time-scales, attributed to secular evolution) galaxies. We hypothesize that morphological changes occur in systems which have undergone quenching with an exponential time-scale τ < 1.5 Gyr, in order for the evolution of galaxies in the green valley to match the ratio of early- to late-type galaxies observed in the red sequence.

I have been very fortunate to be awarded prizes for my academic and science communication efforts in recent years. In particular, my YouTube channel, 'Dr Becky', which I produce, film and edit content for each week has over 250,000 subscribers and 14 million total views (and counting!) is considered to be broadcast quality.

Scientific research cannot progress without the development of new software to revolutionise data analysis. Open source development within the academic community is key to achieving this, which is something I strive for in my own work. I am therefore a strong advocate of both the .Astronomy and Python in Astronomy conference series.

Below you will find details on software packages I have released for wider use by the academic community:

SNITCH: Seeking a simple, informative star formation history tool
SNITCH is a Python code which conducts Bayesian inference of star formation histories using measured emission and absorption features of a single galaxy spectrum or IFU data cube. The code is written to be fully customisable to a user for a wide range of scientific applications. This code is described in Smethurst et al. (2019a) and all users are encouraged to read that paper before using this code.


STARPY: Star formation histories from photometry
STARPY is a Python code which conducts Bayesian inference of star formation histories using two measured galaxy colours. The default colours are NUV-u and u-r, however the user can customise both the colours used for the inference and the form of the SFH inferred. This code is described in Smethurst et al. (2015) and all users are encouraged to read that paper before using this code. 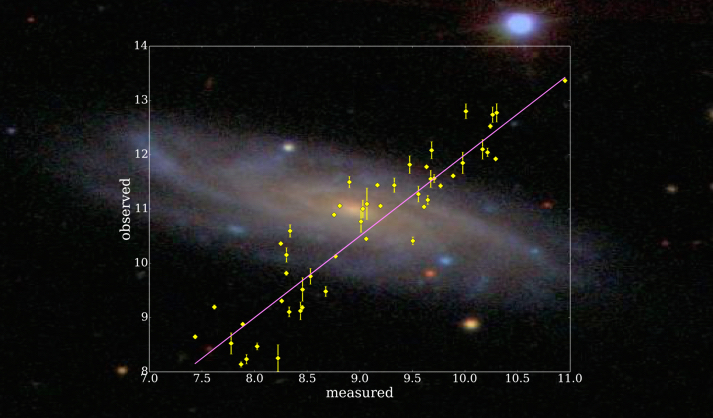 Prefig is a matplotlib figure class to produce presentation worthy plots from existing Python plotting code with the replacement of one line.